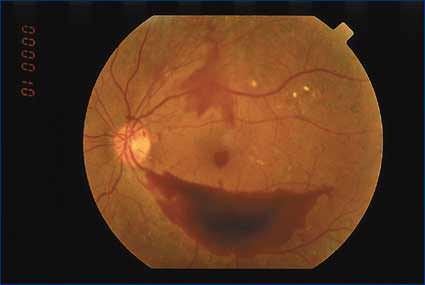 Retinitis pigmentosa (RP) describes a group of related eye diseases that tend to run in families and cause a slow but progressive loss of vision. RP affects the rods and cones of the retina, the light-sensitive nerve layer at the back of the eye, and results in a decline in vision in both eyes. Lancaster Eye Physician Dr. Krulewski states that RP usually affects both eyes equally with severity ranging from no visual problems in some families to blindness at birth in others. RP gets its name from the fact that one of the symptoms is a clumping of the retinal pigment that can be seen during an eye exam.

One symptom of retinitis pigmentosa, usually noticed in childhood, is night blindness or difficulty with night vision. People with normal vision adjust to the dark quickly, but people with night blindness adjust very slowly or not at all. A loss of side vision, sometime called tunnel vision, is also common as RP progresses. Unfortunately, the combination of night blindness and the loss of peripheral vision can be severe and lead to legal blindness in many people.

While there is a pattern of inheritance for RP, 40% of RP patients have no known previous family history. IF there is a family history, it is important to learn more to help patients and ophthalmologists predict RP’s affects.

Considerable research is being done to find the hereditary cause of RP. As hereditary defects are discovered it may be possible to develop treatments to prevent progression of the disease. While developments are on the horizon, particularly in the area of genetic research, there is currently no cure for retinitis pigmentosa.

Nutritional supplements may have an effect on RP. It has been reported that Vitamin A can slow the progression of RP. Large doses of Vitamin A are harmful to the body and supplements of Vitamin E alone may make RP worse. Vitamin E is not harmful if taken with Vitamin A or in the presence of a normal diet.

Despite visual impairment, people with RP can maintain active and rewarding lives through the wide variety of rehabilitative services that are available today. If you are interested in learning more about RP please contact our Lancaster office today!